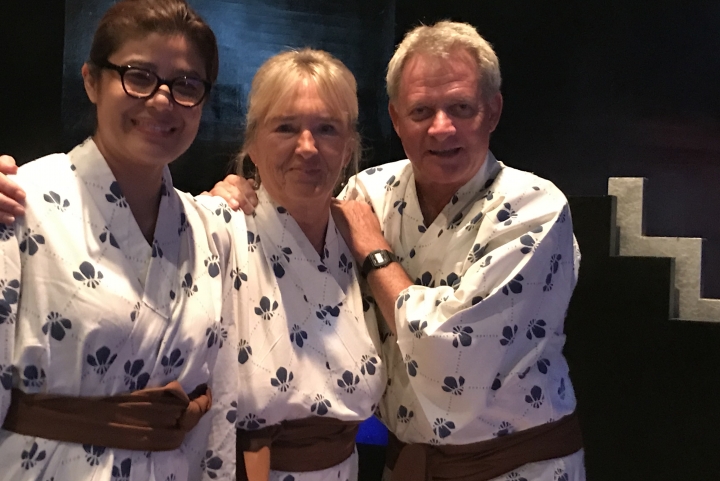 One positive aspect of having to change our train for today is that we left at 1230 instead of 10am – a much welcomed change. The merry band of VU travellers left Shinagawa station for Maibara on the bullet train loaded with bentos boxes & booze bought at the station cafes. Another huge and impressive train station in Tokyo with millions passing through daily – no wonder it’s full of shops and restaurants. On arrival at Maibara we made for the exit and had to wait for the massive crowd coming in the opposite direction that filled the entire corridor. There was no room to squeeze by, even for a lean frame like mine! I have never seen such a mass of bodies at a station. The population of Japan is unbelievably huge. First class or the Green car of a bullet train is well worth it at just £30 more than a standard carriage..comfort and relaxation whilst smoothly gliding at a very fast pace to the next destination.

A two hour coach ride later we arrived at the Ruriko Yamashiro Onsen for a one night stay and indulge in the popular Japanese passion – hot spring baths. During a service station stop “stitch up merchant” Andy had bought a packet containing a selection of Japanese delicacies for a celebrity challenge and as the rugby celebrity onboard, there was no hiding place! I closed my eyes and dipped my hand in the packet, felt all sorts “things” that made me a little uneasy, picked one and shoved it in my gob. I was expecting the worst. However, I quite enjoyed it! It reminded of pork scratchings so I chose well – stitch up back fired!

We stayed in traditional Japanese style rooms. I walked into my room, saw the living room with a couple of very low tables, a cushion and chair with no legs and a TV; sliding doors led into another room with just a low table and some low chairs; I was looking for the bedroom. More sliding revealed windows, back tracker on myself and found the bathroom sink & toilet but still no bedroom. How does this work I wondered?! Where do I sleep? More sliding and discovered some bedding cushions and pillows. I messaged Miko with “How does this work?” “ You put the futon on the floor and make up the bedding and duvet” she responded with smiley imojis.

Dinner was a feast of Japanese cuisine. Shabu Shabu style where you cook in heated water on a small pan over a flame.  Loved the beef, squid, miso soup. later that evening the hotel put on a traditional Japanese drumming show which was amazing and amusingly followed by a Thai lady boys show!! That was my signal to duck out and get to my laptop as the Uk office was open..promise 🙂