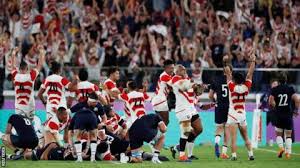 Phenomenal! is one word that springs to mind in describing the demolition of Scotland by Japan. What a game! Th whole of Scotland and the entire rugby fan base demanded this game went ahead and they were rewarded with one of the best games ever! Watch out South Africa in the Quarter-Finals – you need to bring your A game and more!

The Typhoon impact continued and the train we were due to catch the next day to Kanazawa was cancelled due to the line being submerged in water. I found this out just before we left for the stadium and was told I had to go and buy new tickjets on an alternative line so our guests can continue the tour as planned. So instead of picking up a ticket I had arranged for me at the stadium I had to forego that, drop the guests off at the stadium and head back to the nearest shinkansen station to sort tickets out. Flights was not an option as all flights were fully booked. Miko and I managed to sort new tickets and just made it to Nang’s thai restaurant enjoying a feast of thai food and morphed into the ecstatic atmosphere watching the game on a 63in tv! I was given a Japan head scarfe to wear by Nang, the perfect hostess and owner of the restaurant, who made sure my Sake glass was never empty. Nang educated me in the two different types of Sake – fermented “Shochu” sake and refined “Nihonchu” sake – I sampled both types and my preference is Schochu which was a lot smoother and tasted so much better. We will definitely be back there for the semis amd final..as it’s not far from Yokohama stadium.

Picking up guests post match and all were simply overawed by the game. RWC is delivering superb entertainment. Our driver Katsu took us the fish market where we enjoyed superb seafood at SushiZammai – highly recommended!